Before tackling the climb out of Stevens Pass, and in the interest of delaying the inevitable, I took time to cram in one more over-priced veggie burger and fries.  Cheese, avocados, mayo and ketchup served up in a little, plastic basket seemed like a reliable way to avoid the task of hiking another eighty miles south to Snoqualmie.  July sun high in the sky and the trail rising 2,000 dusty feet before us, we finally began our slog at 12:44 in the afternoon.  My body provided near immediate feedback on the foregoing choices.  First, I really need to eat more salad.  Second, the afternoon sun is not my friend – smart people start early.  Third, rigorous hiking on a stomach full of town food should be avoided at all costs.  In sum, this felt like a terrible idea – the idea being hauling my fully resupplied pack up neverending switchbacks on a stomach freshly filled with fatty goodness, fully exposed to relentless summer sun and temperatures flirting with 90 degrees. 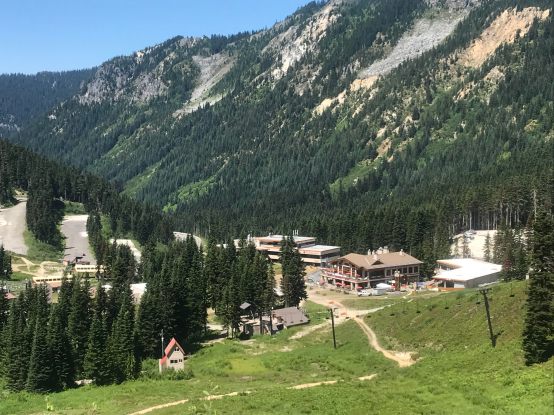 Taking a breather on the scorching switchback, looking back on Stevens Pass.  Sure felt farther away than it looked.

Nevertheless, I put one foot in front of the other, however haltingly.  Breathing heavily and acutely aware of my heavy load, my stomach, or, more accurately, my entire digestive system which seemed to be in revolt.  My quads and hamstrings demanded oxygen to climb while my stomach tried to hoard the blood in an effort to carry on its digestive work, a process that would ideally have been aided by resting languidly in the shade.  The arbiter of the blood distribution question, my brain, ultimately chose forward movement over comfort, aware that our campsite was 12 miles ahead and there was no time for lollygagging.  Stomach was not on board with this decision and made its displeasure known.

To the uninitiated, backcountry bathroom things are one of the most mysterious wonders of the trail.  “Gross” is the typical knee jerk response.  The modern western citizen cannot fathom a world without toilets, those porcelain oases in which to handle your business discreetly, modestly situated behind an (ideally) locked door.  The mere flick of a handle ensures all matters of waste are whisked away efficiently and hygienically.  So civilized, so reliable.  When deciding to live the better part of the summer in the wilderness, one of the first realities you must come to terms with is, frankly, the need to poop outside in a hole of your own making.  I will spare my readers the nitty gritty details of said activity and leave it at this:  abiding by Leave No Trace principles on this matter is a small price to pay for the privilege of existing in and respecting our world’s magnificent wilderness areas.  And, honestly, it’s really not a big deal for natural things to occur in nature.

What can, however, invariably complicate the bare ass kumbaya moment is a highly trafficked trail.   As we climbed out of Stevens Pass and my guts writhed with pain, threatening rebellion, I shared the mountain with a steady stream of Sunday hikers moving down the slope.  While I can sing the praises of a private, serene commune with nature, this experience does not jive with herds of weekend hikers witnessing the event.  The presence of society makes abiding by society’s standards of decorum an imperative and, nothing violates the social contract as much as locking eyes with another human while taking an emergency dump ten feet off the trail.    So, to bring it back around, my physical discomfort was exponentially compounded by the existential threat of an embarrassing encounter that would transgress the bounds of acceptability, leaving me red-faced and another human likewise traumatized.  Thankfully, however, within a couple hours, the crowds thinned and my digestive upset resolved without ego-crushing incident.  Disaster averted, lessons learned. 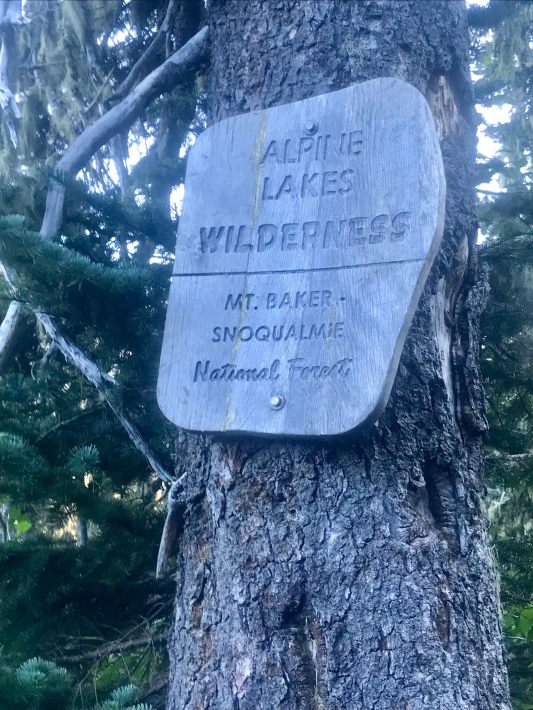 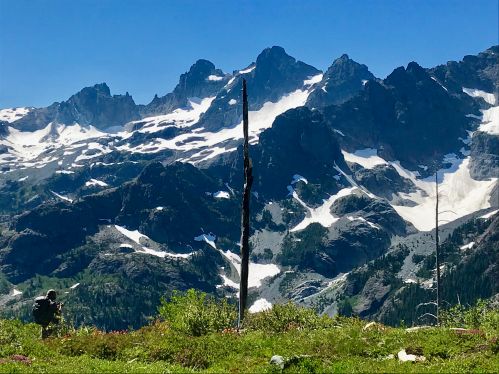 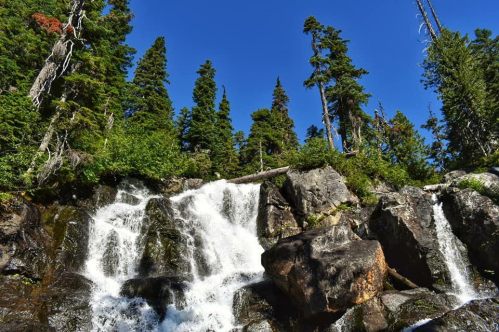 Worry about my bowels was quickly supplanted by worry about mosquitoes.  We had entered the Alpine Lakes Wilderness, a pristine area within the Mt. Baker-Snoqualmie National Forest dotted with some 700 glacier-carved lakes and ponds.  This abundance of relatively stagnant water provided the perfect environment for the maddening pests to proliferate and ultimately decimate its human prey.  Up until this point, the buzzy beasts had been only an occasional annoyance, easily swatted away and instantly forgotten.  That was no longer the case.  Now, it was the two of us versus literally millions of them, a prolific hatch that could not be evaded through physical barriers or steely psychic grit.

Too hot to enrobe ourselves head to toe in rain gear, hats and gloves, we broke out the big guns:  DEET, DEET and more DEET.  Yes, slathering yourself in DEET is a deal with the devil.  In exchange for temporary protection from the maddening hoard, you sacrifice your all-natural granola identity, waterproof finishes on your pricey outdoor gear, and, possibly, neurological integrity.  After several hours of haplessly flailing at the suckers and decorating my person with countless bloody mosquito corpses, this is a price I gladly paid.  And, while the protective DEET barrier prevents the creatures from colonizing your flesh, it does little to diminish the assault on your soundness of mine.  Still, they continue to exact their psychic toll.  They are forever buzzing in your ears and hovering before your eyes, waiting for your sweat to degrade the repellent to the point when your defenseless skin is fair game once more.

Despite the mosquito mayhem, by day’s end, I felt accomplished.  A late start and no shortage of discomfort, we’d still managed to knock out some respectable mileage.  Typically, we planned to spend the night near a water source to facilitate cleaning, rehydration of our dinner and morning coffee.  Being the savvy backcountry experts we fancied ourselves, however, we opted to make a dry camp at the top of a waterless ridge with hopes of escaping our blood-sucking tormentors.  So, with high hopes and fully laden with water, we made a final push to the top of a grueling switchback.  A full complement of water, four liters, added roughly 10 pounds to the pack, which, after a long day on my feet, felt more like 20 while climbing that last 1,000 vertical feet.  Not long before darkness set in, we reached the top of Trappers Ridge and were rewarded with stellar views of a pristine lake to the east and, to the west, a panorama of the Central Cascades.  The stunning sunset, however, was greatly tempered by the fact that, despite our best laid plans, we had not escaped the mosquitos, nor would we for days.  Swarms continued to buzz about our heads and congregated at the vestibules of our tents, poised to attack the moment we foolishly exposed ourselves. 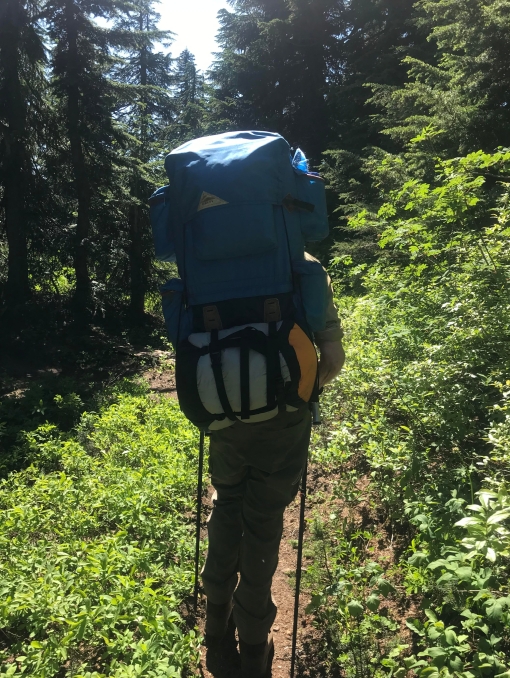 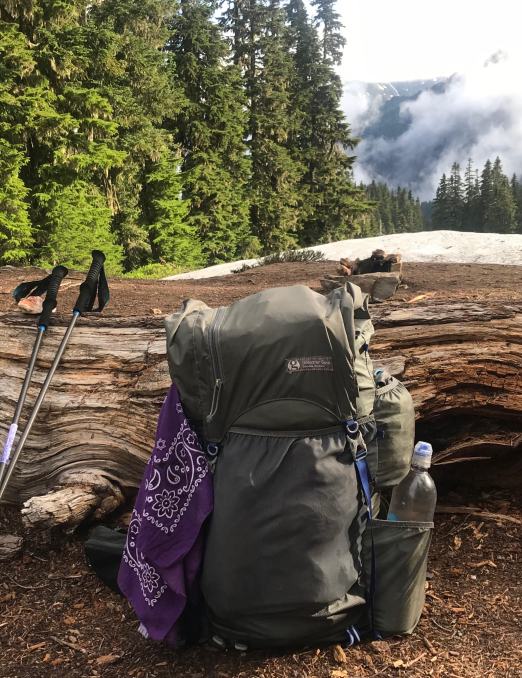 My pack for scale . . . doesn’t come above my shoulders.

There is always something testing you on the trail and, I guess, in life for that matter.  While mosquitos were the challenge of the day, I became aware that the obstacle which had preoccupied me over the previous weeks had, quite literally, diminished in size and intensity.    My body was getting stronger and my fitness catching up to the demands of trudging through mountains for days on end.  There were long days were I felt slow, heavy and tired.  Hiker lore promises one will eventually acquire their “trail legs,” a strong and resilient state in which you can walk all day, everyday free of injury while maintaining a reasonable pace.  I wasn’t there yet, but we were making bigger miles and I hadn’t broken yet.  My legs were covered in scapes, bruises and scabs.  Every night my throbbing feet would lull me to sleep.  They felt like two slabs of beef that had been tenderized beyond recognition.  Yet, after a couple ibuprofen, 8 hours of magically restorative sleep, and a few hobbly morning steps, they were ready to weather another pummelling. 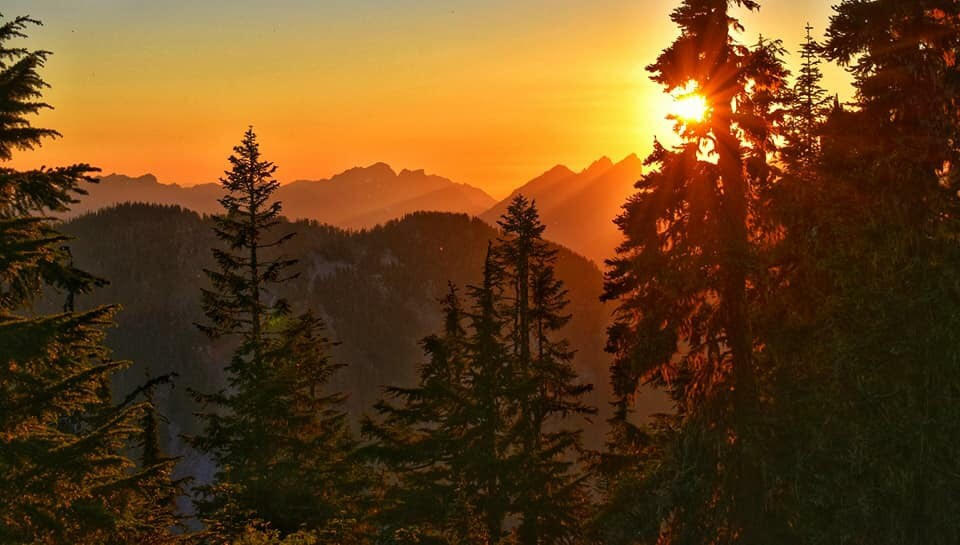 Our view from the top of mosquito infested Trappers Ridge.  Photo credit goes to Jason . . . my iPhone pic did not do it justice.

The day after our camp at Trappers Ridge, we covered 19 miles with 4,100 ascent and 5,700 in descent.  Three thousand feet of that climbing, however, was one big push up an exposed, rocky switchback near Cathedral Peak.  It was slow going to say the least.  Jason blazed ahead as I plodded along, stopping periodically to catch my breath and curse the mosquitos.  After about an hour of climbing, I paused, panting and sweating, speculating about how far ahead Jason was.  As I looked down upon the rocky snowfield at the base of the mountain, I smiled at the sight of a tubby, little black dog romping and rolling in the snow.  Foxy the dog belonged to Chris and Lindsay, a couple of Appalachian Trail veterans, who came winding down the path shortly after her.  We had met this trio in the previous weeks and, missing my Stu, any dog-related encounter, sighting or discussion invariably lightened my mood.  I remember being impressed and skeptical of Foxy’s ability to hack it.  When I heard she was a stray they picked up in the Appalachian Mountains, I figured she had the grit to keep up with her human companions.  She was just like me in that she was carrying some extra weight from civilization, but that would not keep her from frollicking gleefully in the lingering summer snow.  Fortified with this happy connection, I continued my slog up the unrelenting mass of rock.  I wasn’t about to let a little overweight dog out-hike or out-enjoy me.

After three hours of sweaty effort, I crested the saddle.  How did I know I was at the top?  Jason was sitting cross legged near the edge serenely puffing on a victory cigarette.  Yes, this elicited a twinge of resentment in this former smoker.  From my perspective, this was a cakewalk for him, one that was only enriched by coating his lungs with a veil of tar while the carbon monoxide cut into the oxygen supply for his muscles, brain and blood.  Nonetheless!  I made it, was getting stronger by the day and, of that, Foxy would be proud. 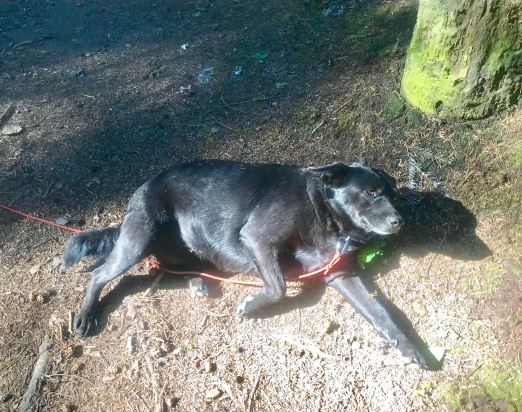 After three hours of sweaty effort, I crested the saddle.  How did I know I was at the top?  Jason was sitting cross legged near the edge serenely puffing on a victory cigarette.  Yes, this elicited a twinge of resentment in this former smoker.  From my perspective, this was a cakewalk for him, one that was only enriched by coating his lungs with a veil of tar while the carbon monoxide cut into the oxygen supply for his muscles, brain and blood.  Nonetheless!  I made it, was getting stronger by the day and, of that, Foxy would be proud. 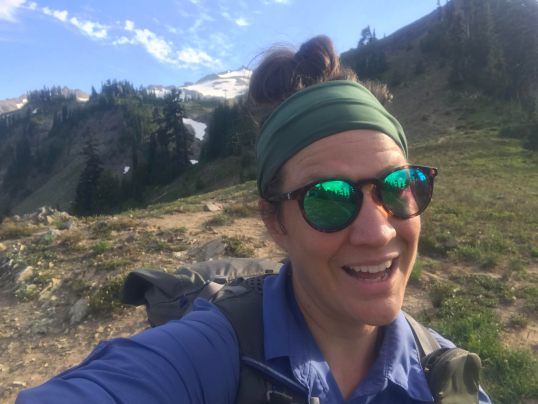